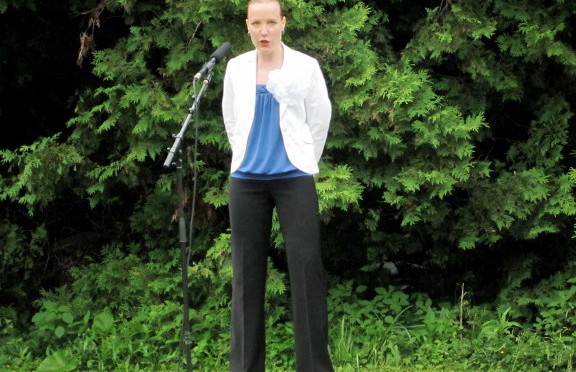 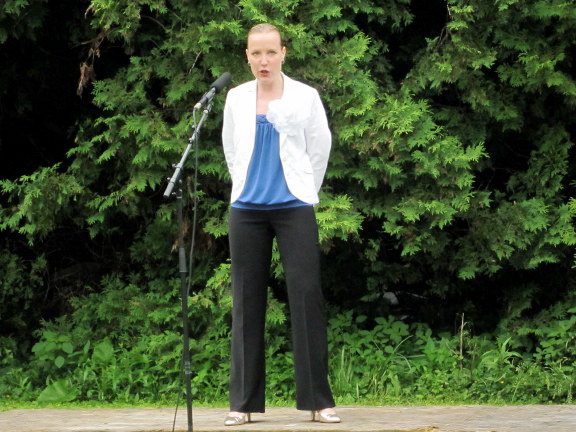 No doubt every farm child knows  that  külaleib –  neighbour’s bread – tastes better than that made at home. Not only had it been baked by a different housewife, but each baker also had her own subtle little tricks to make the loaf more appetizing. One housewife placed the shaped loaf of dough right at the bottom of the oven, another placed it on a cabbage leaf, achieving a particularly delicate savouriness with a golden undercrust.  However, the main reason was variety. The taste of bread made at home was common, everyday; the bread served to a visitor left a festive, holiday taste on the tongue.

My tale today is of a musical külaleib treat Kersti Ala-Murr and Jaak Lutsoja presented to the public at Seedrioru ‘s summer festival, the review of which I had to leave out of last week’s  summary. That article was starting to grow to forbidden size and I had more than usual on my mind to share with readers. There is something special about this artistic duo which forbids a brushing over with three or four worn out, perfunctory pats on the shoulder.

I am reminded of a winter evening a few years ago when I was fighting a heavy snowstorm on a very slow expressway in order to go listen for the first time to these same two. I didn’t turn back only because jam packed traffic made it impossible; the only choice was to go with the flow. Having arrived and relishing the concert, I thanked all good spirits for the opportunity. On later reflection I came to the conclusion that a person can experience such a wonderful event no more often than every four years. The concert occurred on February 29, to be specific.

Seedrioru’s annual festival to welcome summer proved I was wrong. And I felt deep joy in my mistake. Kersti and Jaak performed incomparably and captivatingly, especially in the evening program which, due to the rain, was moved from the open air stage to the main hall. This last minute reorganization brought about a certain improvised feel which infected both the performers and the audience. The more intimate atmosphere was put to use adeptly by all those who appeared in the evening program, with Jaak and Kersti in the forefront.

First though, let’s examine the duo’s above mentioned special quality individually. Soprano Kersti Ala-Murr is a vocalist whose wide ranging ability to interpret I have mentioned previously. At Seedrioru she convincingly reinforced my earlier judgements.  If every singer is said to have a musical genre in which they find themselves most comfortable, then in listening to Kersti I am unable to find hers. She is genuinely believable in dramatic opera arias, lyrical solo pieces, as well as in simple folk songs. She shows brilliant dash in operetta, shines in light music, and performs well known folk songs with amazing simplicity. This last ability especially entranced me most strongly. A special charm lies hidden in simplicity and naturalness. Well-known singers who try to engage the public with popular songs love to sing these with a “personal twist” and usually choose a key more appropriate for themselves.  Kersti is free of blame here. I dare add that the art of finding the appropriate key for a singalong is a prime attribute of musicality. 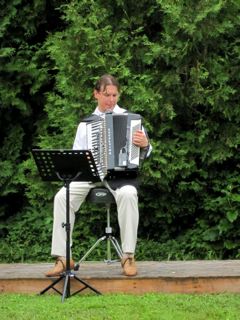 Jaak Lutsoja is neither an accordion player nor an accordion virtuoso; he is an accordion artist in the best and most exact sense. He knows his instrument’s psyche thoroughly; it’s as if they’re one entity. It is a pity that this time he didn’t solo once. That would have been an extraordinary experience.

Paramount, however, is Kersti and Jaak’s performance together as a whole. Theirs is not a common pairing and perhaps for just that reason affects in a refreshing way. The sight of an accordion accompanying a soloist may predispose one to expect a village dance party, but the first notes immediately dispel that notion. It is an art to find the appropriate accompaniment for such a multifaceted vocal program; an art which few can achieve on that instrument. Clearly,there has to be a strong emotional bond between these two artists, some kind of special shared perception. I truly hope that their performances will continue, that their close bond not sever.

This musical külaleib which we were offered a taste of at Seedrioru has been baked in a birch fired family oven; its crust is crisp when hot, the inside pleasantly doughy, and the housewife’s hands have shaped a cross into this unique loaf’s flat topped exterior. May there be plenty more of this kind of bread!